The Gospel & Hymns of Charles Wesley

Today the new video series, The Gospel & Hymns of Charles Wesley, began on YouTube and my Facebook page. Go to Bill Phares on both YouTube and Facebook. Each weekday, Monday through Friday, I will take a fresh, as well as a historic look at the hymns written by Charles Wesley. The theology of Charles and his brother John were clearly a critical foundation for the Methodist movement of the 18th Century in Britain and later in America. This theology was the message both desired to impart in the more than 7,000 hymns written by the Wesley brothers. Both were ordained Anglican clergy and traveled across Britain sharing the Gospel through preaching and hymn-singing. The Methodist movement was instrumental in the spiritual Great Awakening in Britain. There is no doubt that the hymns of Charles Wesley were equally as vital as the preaching in this revival. 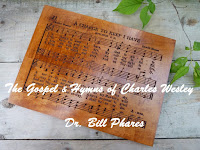 Each day the video will feature a different style of singing and playing Charles Wesley's hymns. Some will be traditional and others contemporary. The use of piano, organ, guitar and other instrumental instruments will be featured.

I will also be posting the day's video here on my blog. I trust that this series will be a blessing in your spiritual journey and that these timeless and treasured hymns of the Church will enrich your faith. I believe the Body of Christ is about to experience renewal and a revival of the beloved hymns of the Church. Their message still rings true in this modern time.