Secrets of the Enemy Being Exposed

The schemes of the enemy against the purposes of God for America are now being exposed and will soon come to light. What has secretly been planned and set in motion is now being revealed.

There is a story in the book of 2 Kings 6 about Syria warring against Israel. Each time the Syrians would make a raid into Israel their plans were spoiled through the revelation given by God to the prophet Elisha. Elisha would inform the king of Israel who would then take precautions against their invasions. This naturally enraged the heart of the king of Aram (Syria) who first thought that he had an informer among his troops (vs. 11). He was then told of Elisha’s ability as a prophet of Israel to know of the king’s plans, even while he spoke of them in secret (vs. 12).
There is a war today in our country between evil and righteousness. It is plain to see what is happening. The secret strategies of those bent on evil have previously been top secret but now God is revealing these plans to his prophets. There is nothing hidden that will not be revealed. When the revelation is made public God will vindicate those who are standing for Biblical values and love for America.
We will witness soon the hand of God at work. It will cause a great awakening in the land. This awakening will touch the entire world and shake every nation.
Posted by bill phares No comments:

The Spiritual Gist That Saved Our Democracy 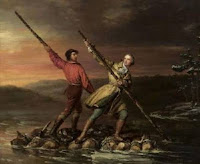 Last night Dutch Sheets and other leaders led a national prayer service near the headwaters of the Allegheny River in Pennsylvania. This area has important spiritual significance in the history of America from the time of George Washington. “We determined that the Lord was putting great emphasis on this area pertaining to the elections and the future of our nation. We are believing that this live prayer gathering in Coudersport, Pennsylvania, near the headwaters of the Allegheny River, will shift America,” Dutch Sheets.

“Decades before he became the father of our county, George Washington was on a dangerous diplomatic mission in the Western Pennsylvania wilderness. A 21-year old major in the Virginia militia named Washington had two brushes with death in this Pittsburgh area, which could have dramatically altered the course of American history.

At one point, Washington and his traveling companion, Christopher Gist tried to take a raft across the Allegheny River. Washington was controlling it with a pole and didn’t do a very good job because he ended up being thrown into the river. And with all the wet wool clothes that they used to wear; it was very fortunate that he was able to be saved by Gist.

Think how different our world might be without Washington. He was the catalyst of the Revolution, he was the leader of the Constitutional Convention, he held everything together throughout the Revolution and afterwards, when our government was formed. And I truly believe, had Washington been killed, that our nation’s history would be quite different and the history of the world, the modern world as we know it, would be quite different.” [Martin J. O'Brien at the Harmony Museum]

Personally, I do not believe the Presidential election is over. I respect each person’s conviction of which candidate should lead our nation. I voted for the party platform that has the best chance of advocating religious freedom, the right to life, and democracy. I believe the name of the man who saved Washington from drowning in the river is significant at this time. “Gist” means the main or essential part of a matter and the ground of a legal action. As you look at the two paintings of Washington and Gist crossing the river you will notice how rickety the raft must have been. Just a few rough logs lashed together, not a boat, just a shaky raft! It would have taken a miracle for Gist to pull a soaked George Washington up onto the raft! The raft would have surely dipped down under the water considering the weight of two men. This rescue of Washington happened during a Pennsylvania winter, December 27, 1753. Interesting that “gist” means the ground of a legal action and that is what is happening currently in the election and that we are less than two weeks from December.

Last night’s national prayer service in Pennsylvania led by Dutch Sheets was the “Gist” who reached out with an appeal to Heaven to rescue the democratic election. Democracy is at stake. I participated in this prayer service online. Gist keeps my hope alive that the election is not said and done. Gist keeps reaching out to save our individual rights to life, liberty, and the pursuit of happiness. Gist refuses to let our democratic way of life die a slow death. Gist will not allow our freedom of worship to drown. Who is the true hero in the historical near-death of George Washington, the Father of our country? It is a man named Gist. Who is the true hero in this period of our national history? It is the national prayer service held last night near the headwaters of the Allegheny River in Pennsylvania.