I Am Thankful That Jesus Found Me 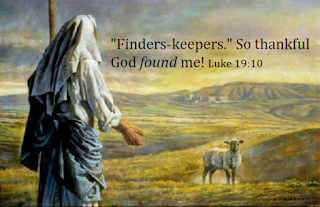 November 20th & I Am Thankful that Jesus found me when I was lost. "Finders-keepers, losers-weepers" is a saying that speaks of someone losing something and another finding it. The one who finds it gets to keep it.

A lost-and-found is a place where lost items are kept to await reclaiming by their owners. I lost my $100 at a hospital. I went to the lost-and-found in the hospital to inquire if it had been turned in. The "finder" of my lost money kept it instead of turning it in. Although the money did not rightfully belong to the finder he/she kept it as their own.

Jesus told three stories about losing and finding; lost-and-found. These parables are found in the fifteenth chapter of Luke. Although I purposely write short posts I am impressed by the Holy Spirit to share the three parables in their entirety. My hope is that the reader will better understand God's great love for those who are lost.

Luke 15:1 One day when many tax collectors and other outcasts came to listen to Jesus, 2 the Pharisees and the teachers of the Law started grumbling, “This man welcomes outcasts and even eats with them!” 3 So Jesus told them this parable:
4 “Suppose one of you has a hundred sheep and loses one of them—what do you do? You leave the other ninety-nine sheep in the pasture and go looking for the one that got lost until you find it. 5 When you find it, you are so happy that you put it on your shoulders 6 and carry it back home. Then you call your friends and neighbors together and say to them, ‘I am so happy I found my lost sheep. Let us celebrate!’ 7 In the same way, I tell you, there will be more joy in heaven over one sinner who repents than over ninety-nine respectable people who do not need to repent.

8 “Or suppose a woman who has ten silver coins loses one of them—what does she do? She lights a lamp, sweeps her house, and looks carefully everywhere until she finds it. 9 When she finds it, she calls her friends and neighbors together, and says to them, ‘I am so happy I found the coin I lost. Let us celebrate!’ 10 In the same way, I tell you, the angels of God rejoice over one sinner who repents.”

11 Jesus went on to say, “There was once a man who had two sons. 12 The younger one said to him, ‘Father, give me my share of the property now.’ So the man divided his property between his two sons. 13 After a few days the younger son sold his part of the property and left home with the money. He went to a country far away, where he wasted his money in reckless living. 14 He spent everything he had. Then a severe famine spread over that country, and he was left without a thing. 15 So he went to work for one of the citizens of that country, who sent him out to his farm to take care of the pigs. 16 He wished he could fill himself with the bean pods the pigs ate, but no one gave him anything to eat. 17 At last he came to his senses and said, ‘All my father's hired workers have more than they can eat, and here I am about to starve! 18 I will get up and go to my father and say, “Father, I have sinned against God and against you. 19 I am no longer fit to be called your son; treat me as one of your hired workers.”’ 20 So he got up and started back to his father. “He was still a long way from home when his father saw him; his heart was filled with pity, and he ran, threw his arms around his son, and kissed him. 21 ‘Father,’ the son said, ‘I have sinned against God and against you. I am no longer fit to be called your son.’ 22 But the father called to his servants. ‘Hurry!’ he said. ‘Bring the best robe and put it on him. Put a ring on his finger and shoes on his feet. 23 Then go and get the prize calf and kill it, and let us celebrate with a feast! 24 For this son of mine was dead, but now he is alive; he was lost, but now he has been found.’ And so the feasting began.
The sheep was lost. The coin was lost. The son was lost. An animal, an inanimate object, and a human being were each lost. Can you sense the sadness in each story? The shepherd loved the lost sheep. The woman was sad because she lost the coin. The father grieved the loss of his son. Each one represented an investment that the shepherd, woman, and father had made over time. Their emptiness would never be whole again until that which was lost could be found.
Somehow try to visualize and emotionally experience the joy the shepherd felt when he found the lost sheep. He found it and he saved it from sure death. Jesus is the great shepherd. We are the lost sheep. Because of sin we were lost and could not find our way. Jesus loved us so much that he searched until he found us. Jesus found us in our lost state. He came to us and saved us. We could not save ourselves. He found us and he keeps us.
If you have ever lost something valuable then you know the joy the woman felt and expressed upon finding the lost coin! Her livelihood was invested in that coin. She was so happy that she wanted to celebrate with her friends and neighbors.
A sheep and a coin are of great value but nothing to compare with a son. A son, a human being, is the highest value a parent can know. A son was lost but now found. The loss was like a death but now he was alive.
Each of us is the lost sheep, coin, and son. Each of us was lost with no way of saving ourselves. Jesus searched until he found us. Jesus came to us and returned us to where we belong. Jesus' joy over finding us is illustrated by the shepherd, woman, and father. We were lost but now we are found!
Posted by bill phares