Hawk Sighting & Envisioning Your Path Ahead 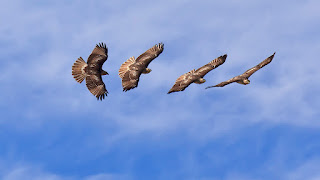 Wow! Holy Spirit is moving today. Four hawks are circling over the area behind my house I recently cleared. I have been watching them as I am in the process of sending emails to pastors in the Oregon-Idaho Conference of the United Methodist Church. I have just finished writing to the Alaska Conference pastors. One hawk landed in a pine tree very close by and then rejoined the others in flight. They fly off but keep returning. I honestly believe this is a spiritual sign from the Lord!
When you have a hawk sighting, it’s a sign that you are ready to take on a larger, more powerful expansion and vision of your world. The hawk symbolizes a need to start looking forward, envisioning your path ahead, and perhaps even preparing for a greater role in life. You could end up finding a wider audience for your talents, gifts, and ideas. A hawk sighting is a direct message from the angels that the time has come to spread your wings, to fly higher, and to expand your vision.
In the physical world, hawks have incredible eyesight, and because of that they have an association, in a spiritual sense, with the meaning “to see.” When a hawk comes into your life, it’s telling you to trust your instincts and your intuition, and let them lead you to the next step in line with your path. Note, the hawk will not lead you on a path that is not yours to follow. They are simply here to show you that it’s time to expand your own road and make greater that which already exists within you. (LJ Innes)
Seeing a hawk means you are protected. Seeing hawks all the time means you are getting a flow of ideas like a hawk does while it is flying on the wind. I have been seeing at least one hawk flying and perching behind my house each day for the last week. I realize now that this is exactly the time I have been writing emails each day to pastors about my evangelism call to the United Methodist Church!
Posted by bill phares No comments:

Metron, Stay in Your Lane

Partners With Stir the Fire Ministry

Prophets Call Things That be Not as Though They Were

CALLING THINGS THAT BE NOT AS THOUGH THEY WERE! (As it is written, I have made thee a father of many nations,) before him whom he believed, even God, who quickeneth the dead, and calleth those things which be not as though they were. (Romans 4:17) God called Abraham the father of many nations even though Abraham and Sarah were too old to have children.

God also told Ezekiel to prophesy to bones...The hand of the Lord was upon me, and carried me out in the spirit of the Lord, and set me down in the midst of the valley which was full of bones, And caused me to pass by them round about: and, behold, there were very many in the open valley; and, lo, they were very dry. And he said unto me, "Son of man, can these bones live?" And I answered, "O Lord God, thou knowest." Again he said unto me, "Prophesy upon these bones, and say unto them, O ye dry bones, hear the word of the Lord. Thus saith the Lord God unto these bones; Behold, I will cause breath to enter into you, and ye shall live." (Ezekiel 37:1-5)
Rev. Colin Smith writes, "To prophesy is to be prompted by God to speak the right word at the right time in the right way." I truly believe that I am being prompted by God to prophesy words of life to the United Methodist Church at this time. It may seem to be too late but remember Ezekiel spoke to dead bones and they came back to life! With God, it is never too late to call things that be not as though they were. Instead, we have been calling things the way they are. Where are the prophets of our day? Can these bones live again? With God all things are possible! United Methodist Church come to life! John Wesley summarized his understanding of Methodism's purpose: What may we reasonably believe to be God's design in raising up the Preachers called Methodists? To reform the nation and, in particular, the Church; to spread scriptural holiness over the land. This purpose for the UMC is still valid. Let us spread scriptural holiness and our UMC and nation will experience reformation. I am calling things that be not as though they were! Who will join me?
Posted by bill phares No comments: 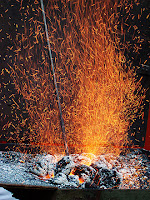 My family name is saturated with images of fire. My Grandfather Thomas Harrison Phares was a blacksmith. He stirred the coals into flame in order to work with the metals he shaped. A blacksmith balances the fuel and air in the fire to suit particular kinds of work. Often this involves adjusting and maintaining the shape of the fire. Stir the Fire Ministry continues this tradition balancing the fire and wind of God to reshape the United Methodist Church in the forge of revival! I am committed to being a spiritual blacksmith in this time in our history.
Posted by bill phares No comments:

Don't Let the Fire Go Out in the Methodist Church

In 1979 God called me to be an evangelist. I was on a Holy Land tour with Pastor Robert A. Shelley and we were in Bethlehem. On a rooftop overlooking Shepherd's Field, I heard the voice of God in my spirit say, "I am calling you to be an evangelist. Do not let the fire go out in the Methodist Church!" Pastor Shelley knew that something significant was happening to me and asked me what did I hear? When I told him what the Lord had said to me Pastor Shelley said, "Yes, that is your gift and I witness in my spirit that you should do it!"

For the last two years, I thought those days were in the past but on Sunday I sensed God's Spirit blowing on the embers. The name of my evangelism ministry in the United Methodist Church was called STIR THE FIRE MINISTRY. I have been saddened by the direction and decline of the United Methodist Church. The denomination has drifted farther and farther away from its spiritual heritage. Our evangelical zeal has waned. The denomination is not going to survive the inevitable division. Even in the midst of moving in that direction, meaningful ministry is happening in congregations and communities.

Revival can break forth! New life can emerge. Coals that once burned brightly can be stirred to renewed flame! Now is the time to "Stir the Fire!" I believe God is renewing the STIR THE FIRE MINISTRY for such a time as this! I sense the Holy Spirit blowing on the embers. I am committed to stirring the fire. I don't know how God will cause this to happen but I cannot escape the call, "Don't let the fire go out in the Methodist Church!" The call is stronger today than it was in Israel in 1979. I am asking for partners to join me as I restore Stir the Fire Ministry.

When Will We Ever Learn?

Sigh! My heart aches and my spirit grieves for the families of our soldiers, air, and naval personnel who died in Afghanistan during the past twenty years. I am also broken-hearted for those injured physically, emotionally, and spiritually while doing their duty. Tonight I am angry because we are also reliving our departure from Vietnam. On April 30, 1975, the last few Americans still in South Vietnam were airlifted out of the country as Saigon fell to communist forces.